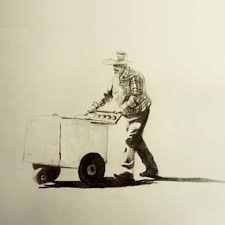 La Primavera was founded during the Spring of 1993 in Dallas,Texas through a partnership between Domingo V. Valentin and his wife Carmen. It was their long time desire to be in business for themselves in order to provide their family with a better way of life. Finally after many years of hard work and saving money, they achieved their dream. The company was named “Paletería La Primavera”, meaning “Spring Ice Cream” in Spanish.
La Primavera initially began by manufacturing and selling individual “Paletas” or Mexican style, naturally flavored, frozen fruit bars with a homemade taste that was unmistakably authentic as it was original. The extensive menu consisted of more than 20 exotic and tropical flavors like Coconut, Strawberry, Lime, Guava, Mango, Pineapple and Tamarind.
Not only were these refreshing paletas being sold in the ice cream store throughout the Spring, Summer and Fall months, but also on the streets of local neighborhoods by La Primavera’s independent ice cream vendors, more traditionally known as “Paleteros”. These paleteros sold the La Primavera brand frozen treats through operating unique ice cream pushcarts as it is traditionally done in the co-founder’s country of origin, Mexico. The paleteros would walk through the neighborhoods ringing their “Campanas” (specially designed chime bells that are attached to the handles of the pushcarts) in order to alert potential customers that their friendly paletero was near by with their favorite frozen and fruity flavors.
In November of 1997, La Primavera began to transport its paletas, pushcarts, and the paleteros to the state of Florida every winter season. The idea was to give the hard working paleteros continuous work opportunities all year around as they waited for the cold winter season in Texas to pass. The paletas were manufactured in Texas and shipped to the warm state of Florida as needed. In the spring of the following year, the paleteros would move back to Dallas and begin to work the new ice cream season there. This routine was accomplished for eight straight years.

In the spring of 2005, La Primavera made its official and more permanent move to Southwest Florida. This new location would be able to manufacture and distribute its paletas through its pushcarts all year around without being effected too much by the cold winter seasons. In 2015, the company was incorporated in the state of Florida as “La Primavera Ice Cream Corp.”
Since its inception, La Primavera has been entirely family owned and operated, continuing to maintain the authenticity and family tradition within the business as it proudly expands the introduction and success of its products, services and business opportunities.

And the rest is frozen treat history…

“La Primavera’s vision is to be established nationally as a leading name brand manufacturer and distributor of authentic and high quality ice cream products and other frozen novelties.”

“La Primavera’s mission is to expand nationally the distribution and success of its products, services, and business opportunities by building a winning national network of successful business partners, while developing mutual trust and loyalty between them, the customers and La Primavera.”